Can you believe that we’re nearing the end of another month? Remember that old saying — ‘time flies’? Yeah, it’s true isn’t it?

The last couple of weeks or so have been a blur…

Our house has been contaminated with a nasty Strep bug … that sounds awful … doesn’t it? Well, it hasn’t been that bad but it has made 5 out of 6 of us sick enough to require antibiotics. Yeah … it was that bad. If you know me, you know that I don’t run to the doctor with every little cough, sneeze and bit of snot! If that were the case, we would be there ALL the time. Yeah, who wouldn’t right? If you have kids then you know how hard it can be to avoid sicknesses. I mean, I’ve got two toddlers, and keeping their hands out of their nose and mouths is a full time job. I hate to admit this .. but one of my twins is also a world renowned nose picker. Ugh. It’s so disgusting, but I can’t keep those fingers out of his nose. I’ve never had a nose picker before … so if any of you other Mommas out there have a suggestion on how to kick that bad habit to the curb, please enlighten me – its becoming a problem. But, I digress here … back to my story about our illness invasion. It was so awful that one day I had to get my 9 year old to cook dinner for the rest of the kids. He did well and I am happy to say that he was able to cook breakfast sausages, waffles and eggs like a boss. I would even venture to say that the other kids thought it was probably the best meal that was ever put in front of them. Yeah, thanks kids! I might just add that to my weekly meal plan! 😉

I’ve come up with my top 3 tips to survive illness with toddlers and in no particular order … here they are!

1. Accept the fact that you will be covered in whatever it is that your toddler is contaminated with. Honestly, I think I had more snot on my shoulder than anywhere else. And you know what’s ironic about it … you never actually realize that you’re covered in it until you’re standing in the grocery store line and the person in front of you is giving you that funny look – yeah, that’s always when I realize that I have dried toddler boogers on my shoulder.

2. Sleep is a mystery. Don’t even try and get any because the moment you try to get to bed ‘early’ to catch up – they will wake up! Trust me, my twins do this to me every time. It’s like they have a sensor in my bed. You know the one – as soon as your head touches the pillow, they wake up. You know what I’m talking about right? So don’t even bother.

3. Call in reinforcements when necessary. Accept the fact that you can’t do it all. I have a hard time with this one. Asking for help always seems like a big, fat failure. Even after having 4 kids. Even after being married to someone who’s only around 1/2 the time (it’s his job – he’s not a jerk people!) I still have a hard time with this. But after being a Mom for almost 10 years I can say that I’ve come a long way in this one. ASK FOR HELP.

Am I already at number 3? I could list another 3 but you get my drift, right? There isn’t a Mom out there who has all of her ducks in a row all of the time so don’t bother comparing yourself to another Momma-Bear. Just do your best and as the old saying goes … this to shall pass. 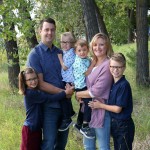